The human brain is not wired for ‘truth’.  Nor does it exactly need to be.

Our lives are built on assumptions, extrapolations and interpretation. We learn that sharks can kill us, and to keep ourselves safe we assume that all sharks are a threat. This is a basic survival instinct built around limited data to create a ‘truth’ we value – all sharks are dangerous – and an emotional consequence – fear. Reality is of course, much more complicated. Here, for your delight, are some sharks being hugged:

For survival purposes, creating the ‘truth’ of ‘stay away from sharks’ is top common sense. The human brain made an absolute truth – sharks = bad – and did something to protect the human body. It bears no resemblance to reality, but then how few of humanity’s truths do?

How about morality? The absolute truth of ‘right’ and ‘wrong’.

If someone hurts a person I love, I would want them to be punished. Why should I pay my taxes to support someone who has nothing but contempt for me and society? Who gives nothing, and takes everything? Yet study shows that restorative justice – rehabilitation and compassion, rather than penalisation, keeps society safe, not retribution or penalisation. What is the right thing to do here? For a criminal? For society? For me? A hundred years ago homosexuality was illegal. Two hundred years ago a thief could be put to death. Today people still campaign to bring back the death penalty.

Morality is in constant flux – but to work together in society, to live as creatures together building something whole – we make it true.  We create ‘truths’ of right and wrong, of law and justice and money so that we can co-operate. It is how we got the Taj Mahal, human rights, community. Very rarely is there a measurable ‘reality’ at its heart.

Oh go on, have a video of wolves being adorable too…

Here are some things that I have believed to be true for the longest while:

Some of this I still ardently believe – specifically climate change. I believe this because the evidence is overwhelming. My belief, however, makes me more likely to seek out information that validates this conviction. Hence another belief – I trust good science.  It goes out of its way to eliminate as much bias as it feasibly can. The scientific method is literally the best tool we’ve got for overcoming our own prejudice, however much reality sucks.

Mushrooms are disgusting. This is based entirely on childhood cooking, when mushrooms were a slimey, grey sludge of choking gloop forced onto the plate as punishment for I know not what sin. I still feel nauseated thinking about it now. Intellectually I accept that this is bullshit. Emotionally, my mind has made the connection between mushrooms = profound disgust that no amount of reason has yet unpicked. I hold both these truths simultaneously. I know that I am 100% wrong about mushrooms. I am also 100% right. They are Satan’s fungi.

So the physically unattractive thing, again, is something that intellectually I’m over, and emotionally still of course believe. Years of being shown images of what a woman should look like, how she should behave, has skewed my sense of reality, and as a society we’re still only slowly getting over that shite. This is a thing 99% of humanity struggles with, I think.

Separating out the intellectual from the emotional is absurd. The brain, with its swirl of fear, anxiety, doubt, social terror, dread and delight, is trying to keep us alive.  It creates truths – stories – to do so. We tell ourselves stories about things we think are true, in order to fit in with society, find our place, and ultimately survive and flourish.

It is a beautiful gift, this construction of truth. It binds us together, extraordinary and full of potential. It is also the same mechanism that can turn us to hatred, ‘othering’ and violence.

This is meant to be a blog post about The Pursuit of William Abbey, because guys – I wrote a book, whoooooo! And sure, it is.  But the book – and therefore this post – are also about truth, in all its tangled complexity.

The titular William Abbey has a gift – or a curse – depending how you look at it. He knows the truths of people’s hearts. Not the reality, of course. He cannot look at someone and tell you whether they’re habitually grubby or have genital warts or what they did last Thursday. Rather, he knows the truths that people believe about themselves and the world, messy and complicated. The beautiful women who believe themselves to be ugly. The morally upright men who know that the best thing to do with a thief, is kill them, because that is right. A disgust of mushrooms. A terror of the unknown. All the stories we create, trying to sort the world into easily understandable, safe categories. Will all sharks eat me? What should I fear? Am I safe to love?

As gifts go, it’s pretty great. To be able to unpick the beliefs that guide our actions, the deepest truths that we have invested ourselves in – who wouldn’t want that kind of understanding? Who wouldn’t find themselves reaching for compassion, when everyone you meet is suddenly as whole and as frail as you?

As curses go, it also kinda sucks. To spend your life swimming in the vulnerabilities, in the constant sea of contradictions and half-constructed truths that we create around ourselves to be able to survive – it is a cacophony. Reality is hard.

Stories make living easier. They keep us human. William Abbey is a story about how you live, when all those stories fall apart. 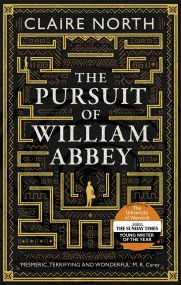 The Pursuit of William Abbey

The Pursuit of William Abbey by Claire North